Posted by crimsonwolf8439, ? Views, Released on March 9, 2017
Prev
All Chapter
Next
Options

So, how are you all? This wolf has some good and bad news.

Bad news: No translations for a while, Visu’s on finals.

Good news: Here is your chapter, and there are still chapters stockpiled.

Sorry about the delay! No, we ain’t droppin this.

Chapter 12 – The Daily Life of the Ractos Household As Seen by the Butler. (Afternoon)

Let me reintroduce myself. I am Welt, the butler of the Ractos household.

While Liliana-sama was eating an afternoon snack made by the house servants, Mery-chan-sama came crawling from underneath Liliana-sama.

Mery-chan-sama is a big Crimson Eye spider. Normally, these spiders are nocturnal, but because of the influence of being around Liliana-sama, Mery-chan-sama had changed her waking hours from afternoon till dawn. (ED: The spider’s species is Crimson Eye, can’t find any references, though.)

[ Kishaaa! Kishaa!] (ED: It’s a Japanese onomatopoeia that was used to represent the sound of the spider.)

Perhaps Liliana-sama was implying that Mery-chan-sama was full from the nearby pests in the area. However, depending on the perspective, it could also be seen as she had just finished eating someone who had displeased Liliana-sama.

[Well, then until teatime at noon, let’s just take it easy~ ]

If Mery-chan-sama was a cat or dog, this scene would have been a heartwarming one. But instead, she was a large spider.

However, judging from Mery-chan-sama’s actions after listening to Liliana-sama, I fear there would be some unjust suspicions in thinking that the words [Take it easy] is some kind of code word.

The servants prepared snacks and tea-cakes for two people.

Mery-chan-sama skillfully raised the teacup, bringing it to her mouth.

Although I heard she was omnivorous, it seemed she also enjoyed tea.

Sometimes, I think there might be a real person somewhere inside Mery-chan-sama.

After finishing tea, Liliana-sama wracked her brains for ideas for dinner.

Since the proportions for dinner were always larger than those for lunch, she would have to cook it with the servants.

Even though Liliana-sama shouldn’t have to do something so tedious, she still insisted on doing the cooking since she loved it so much.

…Sometimes I think that perhaps Liliana-sama’s friend is… no, nothing. Why are you staring at me like that Mery-chan-sama?

Lo and behold, there was the Prime Minister who was able to run like the wind, appearing on our doorstep.

Sometimes I can see this scene clearly with my own mind, even though I am not there to physically see it.

He is probably here because some kind of misunderstanding arose again.

The fact that Prime Minister is called the [Gale-like Old Man] by the neighborhood children, I wouldn’t dare tell him about this.

Later, when the servants were all starting to prepare for dinner, Ractos-sama returned home.

Hmm, it seems that Erza-sama has arrived and met with Liliana-sama already.

-After the recounting what had happened with Ractos-sama-

I can barely understand what they are saying, as I am still quite far away. At most, I can just barely hear what the Prime Minister is saying.

A little while later, Liliana-sama and the servants began cooking for dinner.

Then, just as he said in the morning, Jake-sama had come back home faster than usual.

[I’m home~ Ahhhh… I’m beat. Prince Alto said 『Bastard, what in the world are you scheming?』to me again.]

[At this point, you shouldn’t be surprised about that.]

[I, too made a girl cry, and because of that,about to be falsely charged by the guard.. ]

[ Aaah, that’s why the Prime Minister is becoming the wind ]

Ah, [Becoming the wind] seems to be a code for the Gale-like Old Man.

Nevertheless, Ractos-sama seems to be his usual self. However this time, it appears that he will take a 1 day break.

Or as it should be called: [Azolias Kingdom financial destruction level 1].

Considering all that he said though, he didn’t look like he received that much shock…

[After hearing what I told to the Prime Minister, he was so shocked that he fainted soon after. Seeing that, it made me want to work a little harder, as compensation for my small hiatus and what I had done to him]

So, that is what happened..

Oops, it seems that dinner preparations is about to finish.

I have to go prepare the table, now.

Tonight in the Ractos household, all 4 family members are together having dinner.

…Fundamentally, there is no difference compared to breakfast in this household, except for one point.

I wonder how Erza-sama will eat her food with her helmet on..

The meal proceeded normally; there was no mess which indicating that Erza-sama did not spill her food

[…Eyy, Erza. I had doubts from a long time ago, but how do you eat with that helmet on?]

Ooh! Jake-sama asked her about it!!

Maybe with this, I can finally have the opportunity to decipher her body language via the gestures made with her full-plate body armour on. I must do so, no matter what happens!

[Heeh~… Swordsmanship is amazing, no?]

Although maybe she didn’t say that, I got too focused on my mishearing and wasn’t able to properly decipher the rest of what she said.

It can’t be helped, I’ll look for any opportunity.

With this, the dinner was finished with each one of them doing their own thing, and then going to sleep a little afterwards.

Isn’t this too inconsequential?

It can’t be helped. It is not like I was really that concerned about solving the mystery as to how Mistress is able to eat.

Also, as soon as young master finished his meal, with some kind of seemingly meaningful speech and insinuations expression, he left, so i didn’t have any chance to ask him about it.

Even though perhaps he just wanted to take a stroll, I wonder why he can give out that suggestive aura to that extent.

Anyways, this is all the Ractos household normal day’s introduction is ended.

I will show that tomorrow will be the day that Mistress’ full-plate body armour language has been fully deciphered.

The biggest question of all gaming/manga history will be revealed in the next chapter… HOW DOES A MAN EAT/DRINK WITH A FULL FACE HELMET?!

Red Reaper
Reply to  The Fabulous

Easy. You just move your wrists fast enough that no one will be able to tell the difference between open and closed.

Tenzo-san in “Horizon” uses ninja arts to eat without removing his scarf. So… like that. Yeah.

The butler should ask these “stalker” guys from Call of Pripyat, as they eat and drink with the gas mask on 😀 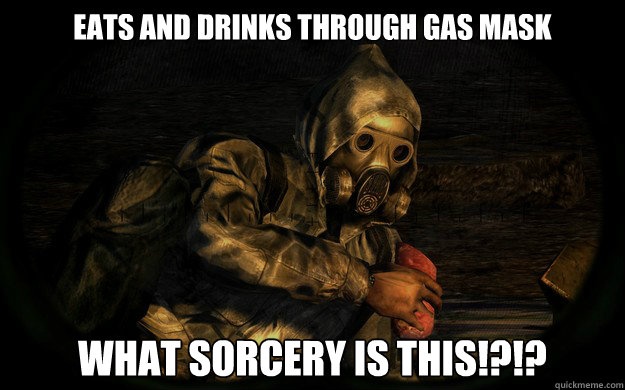 IAmAFuckingWeeb
Reply to  The Fabulous

It’s all in the wrists dude

Thanks for the chapter 😀

Thanks for the chapter, even the closest to them understand how out of the norm they are!!!!!!!!

thanks!
amusing as usual! lol butler’s current no. 1 mission is to understand erza! ahaha!

What ? The spider drink the tea from cup ? Don’t tell me she is kumoko-chan ?

she traveled to that world to kill some time but then she got adopted, feed with all kinds of food and pampered, that’s totally her

Thanks for the chapter.

it is the same way alphonese or luffy does it, god make them skip a time frame, so we always miss the timing they eat

Lol the butler is so funny~
But my favorite character is the Gale-like Old Man! ?
Thank you for the chapter!!

Thanks for the new chapter!

thanks for the chapter 🙂

Of the 4; I find Erza to be the most adorable. The fact that she goes from being a quiet, almost normal girl outside the armor to hyper-genki invincible and unintelligible knight in the armor. And the fact that there’s a total of about 5 individuals who can understand her; her mother, father, brother, and Captain (maybe the Prime Minister too considering how often he visits them).

Liliana would be the second; with how pure her love is yet the surroundings instead make it look like she’s a secretly sadistic witch.

Then of course Grid himself, the poor guy. Face of an axe murderer but the gentle personality of a tenderhearted but hardworking individual.

Jake still doesn’t seem to really have anything standing out other than being fairly honorable (but like his father, misjudged/misinterpreted).

LOOOL… wait… how did… I’m so confused! XD

Would you join them to dinner?

Dinner from the dark side XD

This website uses cookies to improve your experience while you navigate through the website. Out of these, the cookies that are categorized as necessary are stored on your browser as they are essential for the working of basic functionalities of the website. We also use third-party cookies that help us analyze and understand how you use this website. These cookies will be stored in your browser only with your consent. You also have the option to opt-out of these cookies. But opting out of some of these cookies may affect your browsing experience.
Necessary Always Enabled
Necessary cookies are absolutely essential for the website to function properly. This category only includes cookies that ensures basic functionalities and security features of the website. These cookies do not store any personal information.
Non-necessary
Any cookies that may not be particularly necessary for the website to function and is used specifically to collect user personal data via analytics, ads, other embedded contents are termed as non-necessary cookies. It is mandatory to procure user consent prior to running these cookies on your website.
SAVE & ACCEPT
wpDiscuz
22
0
Would love your thoughts, please comment.x
()
x
| Reply

not work with dark mode
Reset