Warning: is_dir(): open_basedir restriction in effect. File(/home/z3nithnovels/public_html/wp-content/plugins/wpdiscuz/themes/default) is not within the allowed path(s): (/www/wwwroot/zenithnovels.com/:/tmp/) in /www/wwwroot/zenithnovels.com/wp-content/plugins/wpdiscuz/forms/wpdFormAttr/Form.php on line 137
 It's Impossible that My Evil Overlord is So Cute - Prologue - Zenith Novels
Breaking News

It’s Impossible that My Evil Overlord is So Cute – Prologue

Rythrinx It’s Impossible that My Evil Overlord is So Cute 5 Comments 6,494 Views

5 Chapters will be releasing tonight…  So give it a bit of time.. 😉

It’s Impossible that My Evil Overlord is So Cute: Prologue

The hero’s body was in quite a bad shape.

His body was covered with many fatal wounds so deep that it was even possible to see bones and internal organs through his wounds, and the blood had already stained his leather clothing. To some extent, it wouldn’t be surprising thing if he already died.

However, he didn’t fall down. Even if the space was full of energy from the Void and it still continued to erode his body, he still wouldn’t fall down.

The pain gnawed on every nerve in his body. His excessively bleeding body made him feel as though he was being tied to a heavy chain. He could feel his entire body becoming heavier; every muscle, every blood vessel, every fibre of his body was weighing down on him heavily .His hands and legs felt as if they were being glued to the ground, gradually making it harder to move.

He lifted up the sword in his hands with his last strength. It was a gorgeous and huge two-handed sword – the holy sword Durandal. He fastened his slack eyes on his enemy.

His enemy was a tall, humanoid creature. It was wrapped in a heavy armor. The armor was black and decorated with parts and patterns that looked like the devil’s wings and skeletons.

It was the evil overlord also known as the king of the strongest in history, and had titles like the Dragon King, the Lord of Hell and the Governor of the Abyss.

Half a year ago, the hero was just an ordinary high school student; and in general, this was an undoubtedly unfair battle.

However, at this moment, the evil overlord’s eyes were occupied by fear and confusion.

“I don’t understand!” The brave heard the evil overlord’s hoarse and dragon-like voice came out of the armor. Its voice was full of unwillingness and hatred. “Why do you want to help those dirty and stupid human beings! I know you have seen these humans’ disgusting behaviors, in your journey towards my castle!”

The evil overlord didn’t know if the hero had acquiesced its words, or he simply didn’t have enough strength to contradict. The hero still kept silence and held his sword.

“Why are you still fighting? Aren’t you a victim of mankind’s ugly heart?!” The evil overlord laughed at Xu Shenxing, “After many difficulties, you finally reached me, and wanted to beat me with the person you trusted. But what happened? That person betrayed you! That person banished you and me to this space and let us emerge and perish by ourselves!”

The hero still said nothing.

“However, it’s still a normal thing for me. The reason why I’m the evil overlord is because I’m strong enough to unify all demons, and I don’t think the dirty human beings are worthy of the world, so I had a war with them and gained an overwhelming advantage, so they called me ‘the evil overlord’!”

The evil overlord pointed to Xu Shenxing. “And you, you are the hero recognized by the holy sword Durandal. Your strength is even greater than mine! In the eyes of those cowardly and despicable humans, you are also a hundred-percent monster! So they would persuade you to fight me by using their blandishments, and at the last time when we fight each other, banish both of us!”

Blood dripped from the hero’s wounds, congealing into a small pool.

“We are the same! Even so, do you still want to continue to fight with me?!” The evil overlord saw the hero still didn’t answer. It thought the hero had been shaken, so it said, “Do you still want to fight for those humans who deceived and betrayed you? Don’t be silly, you do not even belong to this world! You are not an aboriginal of Olaria!”

“Reputation? Wealth? Power? These vulgar things are not worth for you to be fighting against me! It’s impossible that you don’t hate those who turn their back on you!”

The evil overlord roared, “Feel pain! Feel anger! Hate the world! Then join your hands with me and have your revenge on the world!”

“You’re too noisy, and I really don’t care about these things.” The hero finally couldn’t bear the evil overlord’s nagging and said, “To be honest, I’m tired and sore now. I just want to beat you and have a good sleep.”

“What…!” The evil overlord made a surprised sound.

However, the hero didn’t continue to let the evil overlord speak. Bright light appeared on the blade of the holy sword Durandal, dancing in the space with the brave’s swing.

The evil overlord burst out unintelligible roars like it has became a beast who was forced into a corner. Its magic power almost substantialized and formed a huge magic shield in front of itself; as if it thought that was not enough, it also summoned its strongest magical beast, the Ancient Black Dragon King, and let the black dragon stood in front of itself as the second barrier; then it summoned the imperishable Deathfire and Weak Water from hell as the third barrier.

However, all of these defenses couldn’t stop the bright light on the blade of Durandal… no, in fact, they weren’t even able to decelerate the holy sword.

Just in a flash, the magic shield, the Dragon King, the Deathfire and the Weak Water were all disintegrated under the light of the holy sword; and Durandal’s blade also sliced through the evil overlord’s Armor of Endless Night – which was forged since thousands of years ago and has never been damaged.

“Why… What a strong willpower. Why… What are you fighting for…”

The hero silently listened the evil overlord’s whisper, and looked on as its once powerful breaths gradually became weaker and weaker.

The hero shored up his staggered body with his sword.

Numerous dimensional rifts had been torn throughout space. They were the result of the sweeping of Xu Shenxing’s sword.

The sword not only killed the evil overlord, even the so-called “immortal void world” had also been ripped apart showing a space crack. The space was going to collapse.

He simply looked at the evil overlord’s corpse and fell into silence for a long time. Then he said slowly.

“The reason for fighting? … Honestly, I just want to protect the world for my lover. That’s all.”

Yes, this is not a story about a brave beating the devil and saving the world. It was simply a negligible story about an ordinary young world-traveller who brandished his sword to protect his lover’s smile. That was all. 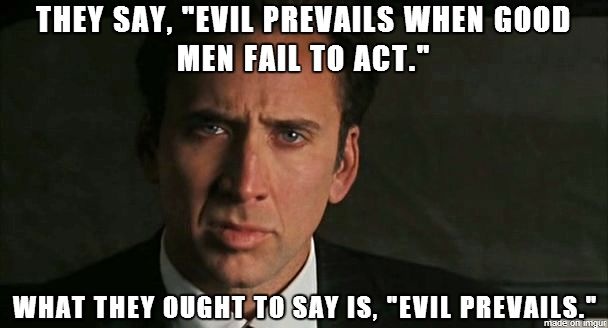 well humanity is a pretty shit race. not surprised.

Yeah but kill inosent evil lord:( thats a bit hard to me. Also I dont like when mc allready has loved one. But author bleed to not judge early…. AAAARGH! and i know typo

Looking back from chapter 75 and I wonder… was this evil overlord the loli girl that accompanies the mc? That seems to be the only option since no other evil overlord has been mentioned and he “defeated moli”… also, this mc have no lover at all according to the story after 75 chapters, so what the hell is up with that? I thought it was a scene from the future, but it says he was an ordinary person half a year ago, so that’s not the case.

I can only believe that the alien princess is the lover mentioned, who went back to her planet, but that seems to be really weird and nothing is indicating that. I’m quite frustrated about this. The author should at least be coherent and make things clear.

Pretty sure this was simply a nightmare the MC was having not an actual part of the story, I say this due to how chapter 1 starts though I’ve not actually read much of this yet.

I know this is old just leaving this reply for future first time readers your comment was making me think this was going to be one of those stories where the author just constantly forgets pre-established content, making everything up as they go like some other works I’ve read recently…

This website uses cookies to improve your experience while you navigate through the website. Out of these, the cookies that are categorized as necessary are stored on your browser as they are essential for the working of basic functionalities of the website. We also use third-party cookies that help us analyze and understand how you use this website. These cookies will be stored in your browser only with your consent. You also have the option to opt-out of these cookies. But opting out of some of these cookies may affect your browsing experience.
Necessary Always Enabled
Necessary cookies are absolutely essential for the website to function properly. This category only includes cookies that ensures basic functionalities and security features of the website. These cookies do not store any personal information.
Non-necessary
Any cookies that may not be particularly necessary for the website to function and is used specifically to collect user personal data via analytics, ads, other embedded contents are termed as non-necessary cookies. It is mandatory to procure user consent prior to running these cookies on your website.
SAVE & ACCEPT
wpDiscuz
5
0
Would love your thoughts, please comment.x
()
x
| Reply